I love the water! I'm a half Sagittarius and half Scorpio so my water sign side keeps me craving a good swim! When I was in Aruba, I went snorkeling by the sunken war ship, the Antila. We were slowly making our way over to the  ship, I had all these cute little fish swimming around me, things were great!

Then suddenly, the fish disappeared as I neared the ship. All I know was I couldn't hear anything, I was under the water, heading for this huge sunken ship and I'm totally creeped out. You can't hear anything, barely see anything, there's no fish to keep you company, you're swimming to a large dark object in a large dark place. This made me realize I need to condition myself so that I won't be scared and panic while underwater.

I've swam with eight species of Shark, both in and out of cages, but even they were small in comparison with what else is out there. So decided I needed to slowly work my way up the size ladder of marine life. So here's what happened when I swam with Whale sharks for the first time.

Initially there were so many small boats out on the water, I was worried we wouldn't see any whale sharks or be able to get close enough to get good pictures. Thankfully,  a lot of whale sharks  arrived and we were all surrounded by more than 40 of them! The whale sharks were all around us, filter feeding off brine shrimp in the water.

Whale sharks are super funny creatures or just don't give a shit. They all swam right up to us, mouths fully opened and they never swerved away. We literally had to swim out of the way of they would've barreled right into us. I had to swerve above a whale shark's tail twice as it came directly toward me. Another time, a whale shark was heading straight towards me with its' mouth fully opened and I had to swerve that too. The whale sharks were also ramming into the boat by accident, they swim so close to the surface that when they passed under a boat they would scrape along the bottom. Several of the whale sharks exhibited minor cuts and bruises to their dorsal and causal area.

Technically you're not supposed to be that close to the whale sharks. The rules state you are supposed to keep a distance by boat of around 100 feet; when swimming stay six feet away from the tail end and 4 feet away from the head. Naturally none of this is followed as no one told the whale sharks they were supposed to withhold these distances! The boat we were on gave us ample time to swim with the sharks, going out two persons at a time, and we were all able to gain some amazing shots. The whale sharks didn't seem to mind our presence at all. Their body language was completely relaxed towards the humans yet over focused on eating.


Swimming with whale sharks was definitely an unforgettable experience and helped me to both understand and appreciate marine life more so. I feel like I am now somewhat more confident in going under water and being around large objects or animals that I may find down there. I appreciate the tour company, Ceviche Tours, for allowing us ample time in the water with the whale sharks, and for making some amazing seafood ceviche for lunch. 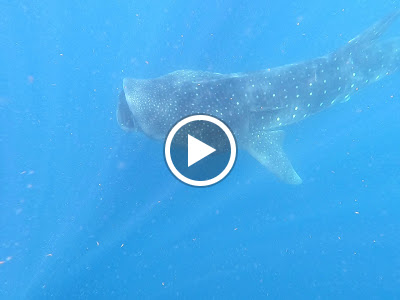 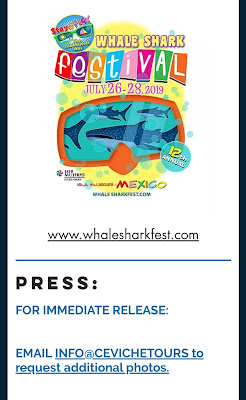 I've always been a huge animal lover and pursuer of knowledge. Combine these two character traits and my life gets pretty interesting! I normally attempt to go away one to four times per year for personal trips and maybe twice yearly for business conferences.

I had the good fortune of accidentally learning about the whale shark festival that is held yearly at Isla Mujeres, Quintana Roo, Mexico. Every year, whale sharks migrate down Mexico primarily from May - September.  The various companies come together to jointly host this festival which starts with a parade down the main streets on the North end of the island. Then over the course of the next five nights, the island hosts a bevy of marine biologists, researchers and other wildlife experts to host educational seminars. There are also local food, music, and artists on hand. The biggest draw for tourists is, of course, the whale sharks themselves.

The whale shark festival is a way to educate people about marine life and explain why biodiversity is so important to the planet. The festival is hosted by a collection of Isla Mujere's marine life tour companies but its main sponsor is Ceviche Tours. Ceviche Tours collaborated with the other island tour companies to help promote both tourism and conservation. While I would like to give a proper review of the actual whale shark festival I sadly cant because the week the actual festival was supposed ti start, the Mexican government (yes you read correctly)  decide to postphone the festival to the following week!

I had a trip to Peru booked immediately after Mexico. I spoke with Ceviche Tours and they too were upset as they now wouldn't be able to attend their own sponsored event (they had to be out of town as well). We were all very disappointed.  I'm guessing there was a low turnout as it was too late for us all to change bookings. Though it was a disappointment to miss the festival, I did get to swim with whale sharks and you can read all about my experience in part two of my whale shark blog! To be continued.
x