The New York gaming conference is a complete who’s who of some of the most influential people in the gaming world. Every year New York City plays host to the gaming conference and this time the event was held at the New York City Jewish heritage museum by Battery Park in lower Manhattan. The morning started off with breakfast, a welcoming ceremony and two panels which ended around the time I arrived at the conference at 10:30am. The first panel I attended was entitled the state of the gaming industry.

The general consensus of this panel was how much the gaming industry will expand over the next five years, up until 2015. Parks Association claimed that “social gaming will become a billion dollar industry by 2015.” How many people do you see on a NYC train pull out a smart phone or handheld device and start button mashing? Guaranteed nearly everyone you pass by on the street is a gamer. The gaming industry has improved so much that primarily on-line game rental companies, like Gamefly, opened branch stores in several locations nationwide. This is in contrast to video rental companies, like Blockbuster Video, that actually had to close most of their stores nationwide and do most of their rentals on-line or from kiosks set up in strategic places.

The demand for games had increased so Gamefly expanded just to keep up with the market. However, Gamefly can boast success now but they soon might be in the same boat as Blockbuster Video as Julie Shumaker predicts that “1/3 of portable gaming is going to fail dude to Android and IOS games.” What is the need for portable or handheld games when you can download 0 – 99cents games for your phone? This was the topic of the next panel which was a debate about if portable devices are necessary considering how many people play games on their android or IOS phones.

Debating that handheld systems will still be in fashion even as phone game apps continue to gain popularity, Andrew Schneider stared the debate off strong when he stated “Teemu and I are wearing black because handhelds are fucking dead!” Andrew and Teemu then went onto say that ‘twice as many IOS sold over handhelds but I immediately thought ‘are they consumers using these phones for gaming or for other things like simply texting. The ‘con’ team also claimed that there are over 14 billion apps, most of which are far cheaper to buy than the $40 handhelds. Teemu also stated the cost of making handhelds isn’t very profitable.
The ‘pro’ team re-bottled that phone touch screens are bad for certain genres of games, like first person shooters. Phones will lose battery power faster as your phone tries to keep up with your gaming, texting and internet. Also when you receive tweets, texts, or calls, your game automatically stops each time. Cell phones are expensive and kids are destructive by nature. What parent would give their child a $200 - $500 cell phone to play games on? Kids can’t even bring cell phones into schools anymore but they can bring handheld video games.

Jaime Luis Gomez is probably one of thee biggest names in music and clothing worldwide. His albums always go platinum and you can buy his shoe-line everywhere from NYC to Japan. You’re probably still trying to figure out why you don’t recognize his name yet? If I called him ‘Taboo’, I think you’d all now know who I’m referring to. Yes, I do mean Taboo one of the founding members of the infamous Black Eyed Peas. My friends, Suny, Starsa and I all had the pleasure of hanging out with Taboo at his book pre-release signing at Powerhouse Arena Bookstore in Brooklyn, NY on February 9th, 2011. Powerhouse Arena hosted the book signing which featured Taboo himself and free Stella Artois beer for everyone.

When we arrived at Powerhouse Arena on that freezing February night, Taboo’s book was on hand at sale price of course. We bought a copy and proceeded to wait in the line. The line throughout the night was semi-short as fans seemed to come in waves. One wave would come just as the last wave was leaving the store. I feel the line was like this because there wasn’t much advertising about this event, we only found out about it two hours before it started. I had never even heard o f Powerhouse Arena before either but I fell in love with the place the moment I walked through the doors. It’s a very down to earth yet artsy bookstore with two floors and a killer bathroom. The co-ed bathrooms have a painted mural stretching throughout all three stalls with truly beautiful artwork that I highly recommend you check out.

I liked that there wasn’t a swarming crowd at the event as it made it more intimate and Taboo had more time to address each fan individually. If he had chosen a signing at a larger book store like Boarders or Barnes and Nobles, all we probably would’ve been able to do was say hi and bye to him due to the amount of crowds that would’ve shown up. I was surprised that there were so many kids, around 10 years old, at this event that wore tons of Black Eyed Peas memorabilia. I always assumed his fans would be a little older. The kids drew pictures and created paintings all which were given to Taboo. Taboo appreciated the kid’s gifts so much; he even did a short dance with them. Being a father of three kids (his third son wasn’t born until after this event passed) he seemed to be a natural with them. 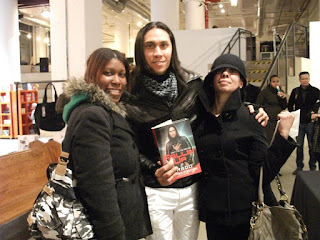 When it was our turn to sign he hugged us all and took pictures too. We got to chat with him for a while and when more ‘pea-ple’ showed up, we let them have their Taboo moment. We decided to stay until the very end which was a great idea as Taboo came back over to us and we chatted with him for the rest of the night. I remember we got onto the subject of his wife and soon to be born son who he, at that time, wanted to name ‘Dreamer’. Once his son was born this past April 2011, he decided to change the name to ‘Journey’ instead. When it was time for him to leave he gave us all hugs and kisses this time and we thanked him for choosing New York City to host his book release. We wished him great book sale numbers and BEP success and were off to eat Pizza. We were about to invite him and his crew to dinner with us but he had already left by the time we thought about asking. 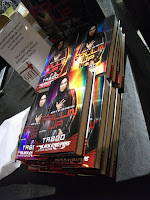 As for his book entitled “Falling up – My Story”, I thought it was a very intimate eye opener into what it took for Jaime to evolve into Taboo without losing himself in the process. Taboo doesn’t pull any punches either as he discusses everything from his mother protecting him from his alcoholic father before he was even born, his first child being born when he was very young, and his close relationship with his grandmother all the way to his lifestyle choices while with the Black Eyed Peas. I found I was able to connect with a lot of what he wrote as we had very similar events. When he spoke about his parents, I thought of how my mom divorced my dad when I was 1 years old to protect me from his alcoholism. She gave him a second chance when he claimed to be sober but messed up again and was gone from our lives.  He slightly remained in my life as I had his number and we all eventually kept in touch until July 1st 2007 when he died of Pancreatic Cancer.

I loved and felt most connected to every mention of Taboo’s grandmother in his book and on his Twitter page (@TabBep). I too admired my grandmother’s wisdom above all others; I think we all do at some point. I love their relationship and how it helped to define him as a father and husband. Taboo also put a lot of candid photos in his book, from his early days to a lot of BEP events and celeb friends. I’m always fascinated by peoples life stories, not just celebrity ones. I’ve heard the most amazing stories come from the most seemingly ordinary people and it’s made me realize, everyone has a lifetime of great stories to share if they can just find people to listen. I urge you all to pick up a copy of ‘Falling up – My Story’ and hear first hand what Jaime, Taboo, has to say.

Note: I’m sending a copy of this article to Taboo himself so to Taboo I say, it was a pleasure meeting you. We appreciated hanging out with you at Powerhouse Arena! Love and Luck to you and your family, both your immediate and BEP family. And that perfume you liked for your wife is called ‘Pure Seduction’ by Victoria’s Secret. Truthfully, everything smells good there so she’ll love whichever you pick! 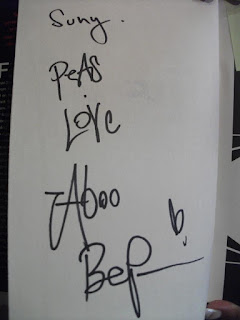 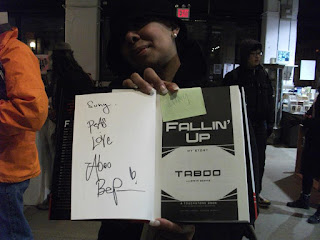 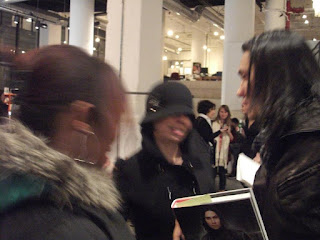 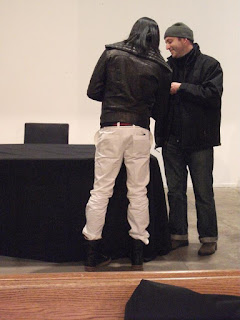 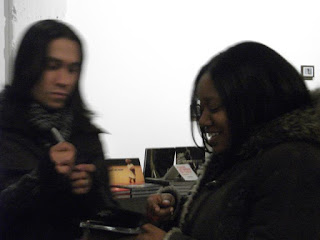 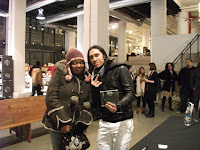