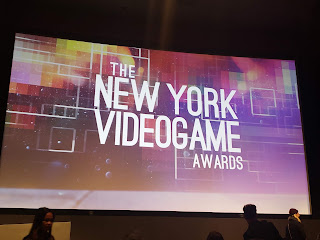 On Tuesday January 22nd, 2019, I had the pleasure of attending the 8th annual NY Video Game Awards show at the SVA Theatre in Chelsea (lower west side of Manhattan for all you tourists out there).  David Delliquanti from the Daily Show with Trevor Noah, returned as host for a third year in a row. This awards show is brought to you by Ny Game critics foundation which is a charity that focuses on scholarships for kids and community outreach here in NYC.

The VGAs featured several gaming achievement categories in which the winners were presented with their awards. in front of us live viewers and fellow Twitch streamers. There were 13 award categories and then a few honorable mentions, including the Andrew Yoon Legend Award which went to Jade Raymond, one of the creators of Assassin's Creed. As expected, God of War, Red Dead Redemption 2 and Tetris Effect were the three biggest winners for the night, each winning in multiple categories.

We fans were treated to an amazing night of mingling with fellow gaming enthusiasts, celebrities, comedians and more. Everyone in attendance received codes to four free Steam games, two of the free games were winners at the show. After the show, we were treated to free beer and liquor, courtesy of Brooklyn Brewery, along with tunes from DJ Reznor.

There were a lot of highlights from this show but a few moments that stayed me with were the comedic videos the host, David Delliquanti, show to us in between awards. The funniest being an 'In Memorandum'  segment where the host shows us videos of his most tremendous death scenes in random video games he played throughout last year. The most, and best portrayed, deaths came from Fortnite (I mean, what more prolific death can you expect other than a Fortnite death). 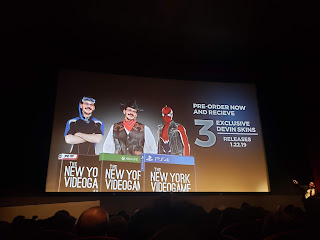 My personal favorite highlight of the night was when we were given the opportunity to watch upcoming game trailers and one in particular stood out. Treachery in Beatdown City is an upcoming, 8-bit arcade style fighting game that was crowd funded into existence on Kickstarter and will be released later this year for the PC and Nintendo Switch. The sound track features the collaborative works of Mike Eagle, Mello Makes, and Inverse Phase. I absolutely loved what i saw of this game. Picture 8-bit versions of people from the 80s, and they get swept into a nefarious plot when a bunch of gangbangers kidnapped the president (whose name happens to be Obama).

Follow along with the three main characters,as I'm unsure yet if  you can play as others, on this side scrolling, fatal fury-esque retro game.  I absolutely loved the design, the characters, and the story. from watching the trailer, it seems to be a very well put together game. It's also hella funny as you'll see in the trailer posted on this page. I can't wait for it to come out! All in all, I had a really awesome time at the awards show and hope to be back next year for the 9th annual NY Video Games Awards Show! 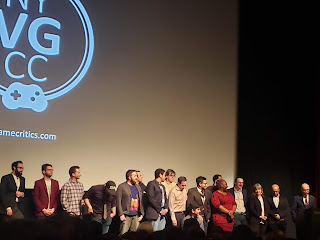