I like every normal human am bound by curiosity; it fuels us to find answers to our inner most thoughts. So when I was given the opportunity to write a feature story on any current celeb I started thinking out of all the celebs I’ve ever met, who am I most curious about. It had to be Jake Gyllenhaal. Why? I was born three weeks before he was, Jake’s maternal family is from New York City, his name has been posted in every type of news story around and I’ve had the pleasure of hanging with him once upon a time earlier this year.

There seems to be many different side to Jake and I feel often what people read about him leads them to believe he’s either ‘this type’ or ‘that type’ of person. For example, after Jake starred Ang Lee’s Brokeback Mountain, a lot of people questioned his sexuality. Many people believed he was gay and dating his best friend who he’s known since grade school. Jake also once stated in 2007 during an interview for NOW Magazine UK edition “'I don't think I'd be afraid of [homosexuality] if it happened.” This comment caused a lot more people to question him.

I don’t feel Jake is gay or bi-sexual, which he himself has stated numerous times, at all regardless if what’s posted in articles. I met Jake in April 2011 while he was promoting Source Code at the Apple Store in SOHO NYC. After every one else had left the event, I hung around, like I normally do after an event, and Jake I’m guessing thought I was waiting for an autograph and came over to me on his own accord. I wasn’t paying attention as I was playing with my camera but other fans did and pretty much rushed him by the stage. The commotion caught my attention and I looked up at him and smiled and asked hi for a picture. He smiled back and said “sure”. Jake came to me, grabbed me and put his cheek right up against my cheek for the picture. Reality caught up to us and I jerked away but he pulled me back over to him. 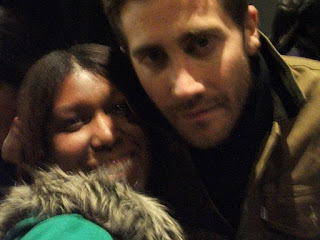 My friend took the picture and Jake asked her “was it (the picture) okay? I want it to be alright for her (meaning me)” which surprised me as he was being overly sweet and comfortable around us. After he signed a few more autographs, his publicist dragged him away. He looked back at me and I gave him a little flirty smile and he stopped completely, smiled back with this curious and mischievous look on his face and began to walk back over to me.

His publicist intervened again, trying to get him and the other cast members to move to their next event sadly. Not done playing with me yet, Jake continuously jumped back and forth from behind a wall, waving like a madman at me. I started laughing and I playfully said “What are you doing? You’re such a weirdo!” Yup, I called Jake Gyllenhaal a weirdo to his face, but it was all in good fun. His publicist finally dragged him away from me and out little moment together passed. Does our little play session together mean he’s not gay, hardly, but again when it comes to celebs, we believe what we’re lead to believe due to our subjective views.

In addition to questions about Jake’s sexuality, there have been questions about Jake’s demeanor towards the public. There was a report that a paparazzi tried to take a picture of Jake while he was using the bathroom and this year SXSW festival in Texas. Most reports say Jake had an altercation with the photographer and a lot of people’s response was that Jake was out of line because he didn’t need to resort to whatever violence they claimed he acted with. This story is a complete contradiction to an encounter with Jake my friend had recently. My good friend Danny was a waiter at Marc Meyer’s Cookshop restaurant here in the Chelsea section of NYC.

On almost every summer Sunday, Jake brings his mom and sometimes his sister Maggie, to have brunch at Cookshop as they love the healthy menu options. Jake’s family comes here so often that his mom became friends with my friend Danny. Jake doesn’t even mind Danny coming over to chat with them when he’s not their server though Danny never did this as he respected their privacy.

All four of these examples with Jake show exactly who we, as fans and media alike, associate him to be like. An explosive and confrontational jerk for the media so they get a better story; a weekly acquaintance for my friend who wants better tips but also wants the Gyllenhaal family to feel at ease while at a relaxing brunch; the seemingly “in the closet” actor for those fans so into celebs lives they can’t see to differentiate fact from fiction. And then there me who met a guy, had a moment and hoped to make the moment last a little bit longer.

The only people that have a right to say Jake is ‘this person’ or ‘that person’ is Jake, his family and friends. Jake’s a no bullshit type of guy, if he was gay, I don’t think he’d hide it, if he truly was a jerk that liked confronting paparazzi, you’d see it in him. He’s just a guy trying to be himself, ignore all the nonsense people say about him because of the profession he’s in. In any given situation, Jake will always just be Jake and unless you’re on his A-list, you’ll never be in the right when judging what you think you know about his true personality.